With a backdrop of move-in day at Florida State University Wednesday, Philip Levine searched for votes in his bid to move into the Governor’s Mansion.

The former Miami Beach Mayor is in a dead heat with former Congresswoman Gwen Graham in Florida Democrats’ closest primary race for governor since Bill McBride edged Janet Reno in a three-way race in 2002.

Levine, in t-shirt, blue jeans, sneakers and a ball cap, strolled onto Landis Green where a couple of dozen volunteers had set up tables with Levine’s Rebranding Politics shirts and caps for a get-out-the-vote effort while students began to occupy dormitories for the fall semester.

Levine and Graham have jockeyed for the lead for the past year but this past weekend Tallahassee Mayor Andrew Gillum’s campaign began to show signs of growing support. One recent poll placed Gillum in first while two others show his numbers have more than doubled since a recent endorsement by Bernie Sanders.

Boosted by weekend rallies in Orlando and Tampa with Sanders, Gillum launched a Pensacola to Miami bus tour Monday. He’ll make three stops a day until Election Day before returning to Tallahassee to vote.

Where does Levine stand in polls? 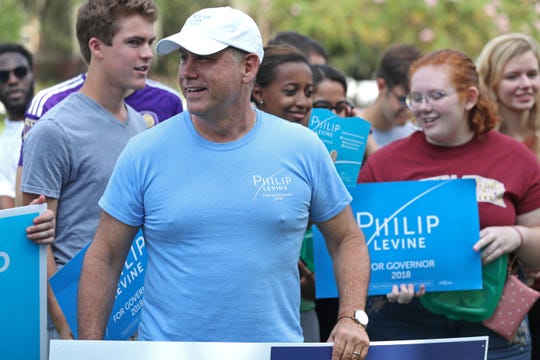 A RealClear Politics average of polls up to August 20 gave Graham an eight-point lead on Levine but three polls since then indicate a large bloc of undecided voters are beginning to commit, apparently to Gillum’s benefit.

But Levine has maintained throughout the summer campaign the key to victory in the 2018 election will be decided on the ground.

“We go door-knocking every day all over Florida, and we have hundreds of people out there,” said Levine, reciting the location of his 14 field offices. “There’s nowhere we won’t go and there’s nobody we won’t talk too. Our time is now.”

The Levine camp Wednesday pointed to a SEA Polling & Strategic survey conducted this week that indicated Levine and Graham are in a statistical tie for first with Gillum eight points off the lead and 15 percent of voters undecided.